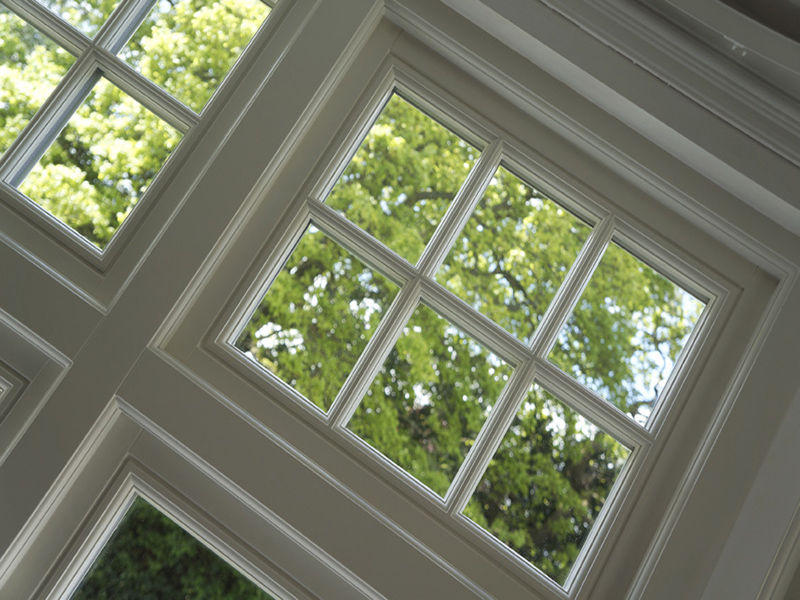 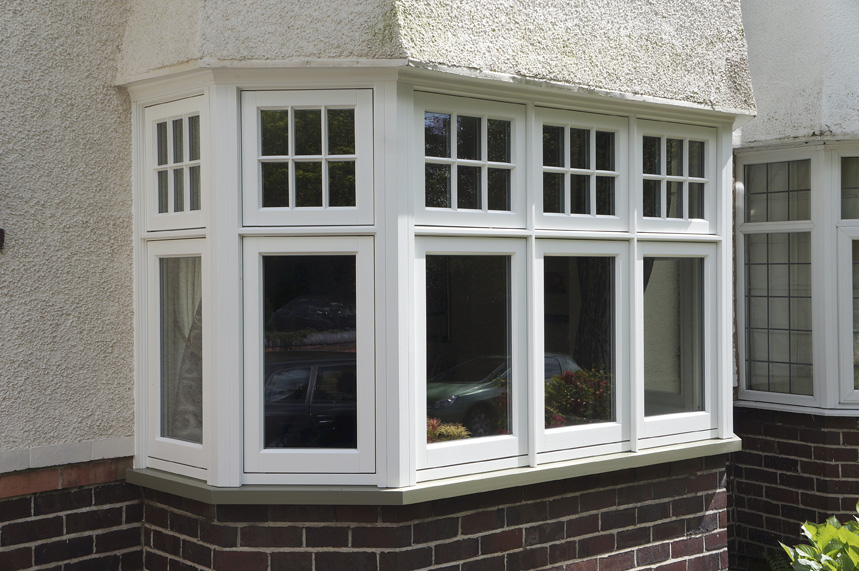 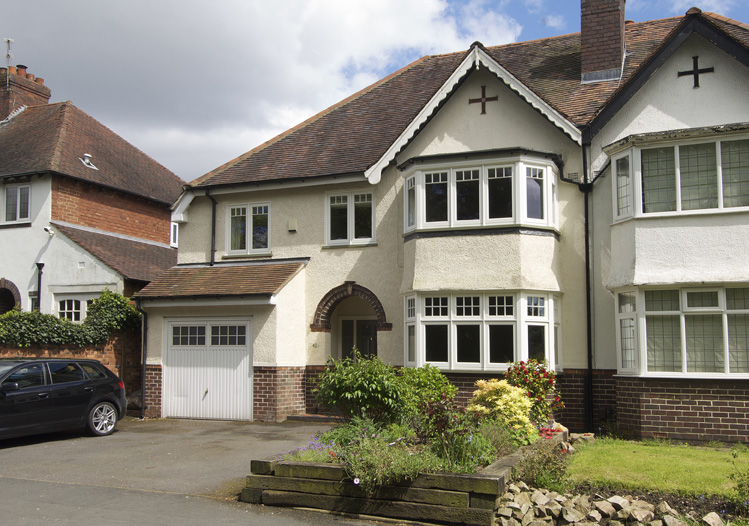 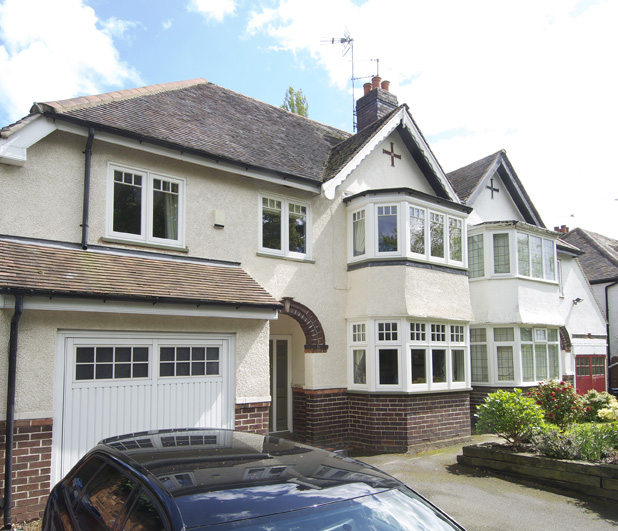 This 1920s home in Leamington Spa, close to our showroom in Birmingham, is brought up to date while the indicative style of the 20s is enhanced with timber windows and a new front door.

Our clients were keen to replace their PVC windows and front door that they had installed in the property when they bought it. The PVC was chosen at the time to suit their budget and was only ever a stopgap.

Researching a company to supply and install the windows resulted with Timber Windows products being chosen. The quality of materials and construction finalised the deal – excellent guarantees and doors and windows that surpass expectations.

“The products are fantastic, service is excellent and the engineering qualities impressive.”

Interwar properties featured the Deco casement windows as standard, the casement window with decorative glazing bars creating Georgian squares in the upper fixed casement. This produces a recessed effect and is entirely for decorative purposes.

Timber windows are made to order – bespoke replacements that are worth waiting for, high quality materials constructed to specific measurements and requirements. Our clients were impressed with the individually tailored designs suggested by our team; the designs suited the Leamington Spa property, enhancing the character of the Birmingham home.

A former brewery in Warwickshire retains all it’s original charm with a total replacement of all the sash windows. Using very modern design and timber production techniques this large property now benefits from draught and rattle free windows.

The brewery played an important part in the local area and strict covenants restricting the ways in which the home could be brought up to date in terms of thermal efficiency and materials.

Our team at Timber Windows have many years experience in designing and finding solutions to technically challenging properties, whether this is due to building regulations or structural issues.

Mr & Mrs K, the owners, opted for a complete replacement of all the windows with new sash windows, they offer looks replicating single-glazed originals yet also use modern components and materials that discretely keep draughts out and warmth in. The conservation constraints meant that matching the originals was absolutely paramount, so the recommendations included using a mixture of hidden spring and traditionally operated sash windows with cords and weights and also utilised slim box sashes.

Mr & Mrs K, the owners, chose an off-white paint finish to avoid the starkness of obvious new windows, adding to the effect of original features. They plan to replace the French doors, rear entrance door and arched windows at a later date.

“We’ve had many compliments from our neighbours and passers-by, admiring the quality and authenticity of the replacements, and it was nice throughout the winter months to be able to sit comfortably by the windows without the draughts” says Mrs K. 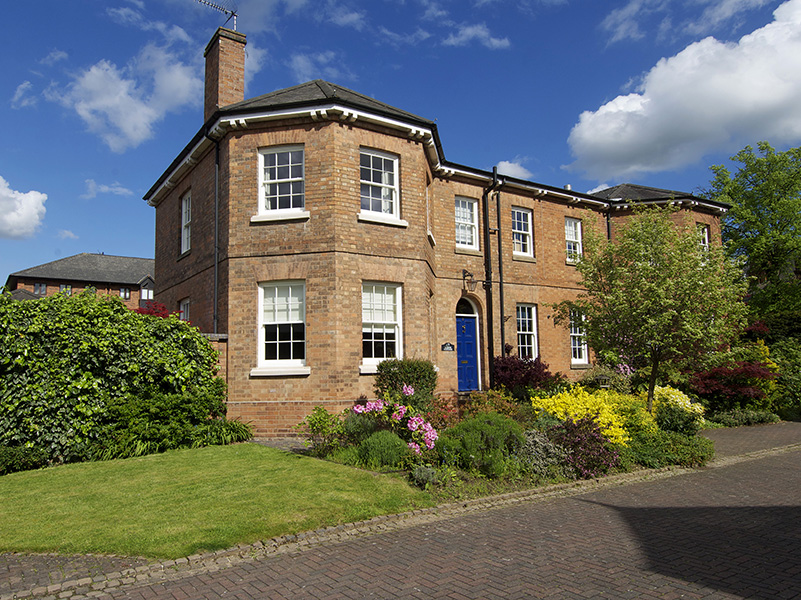 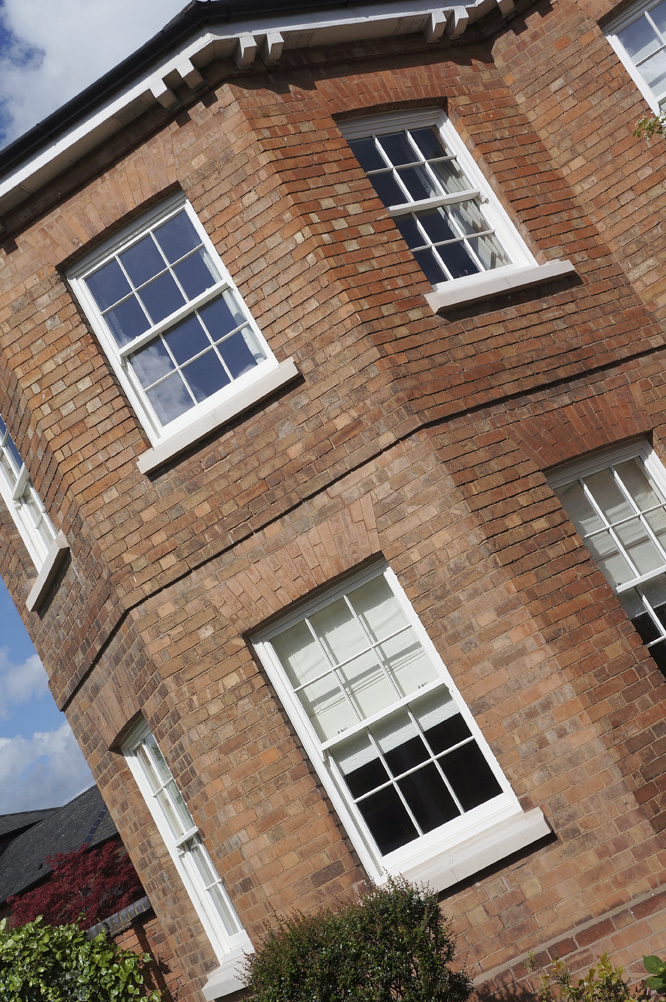 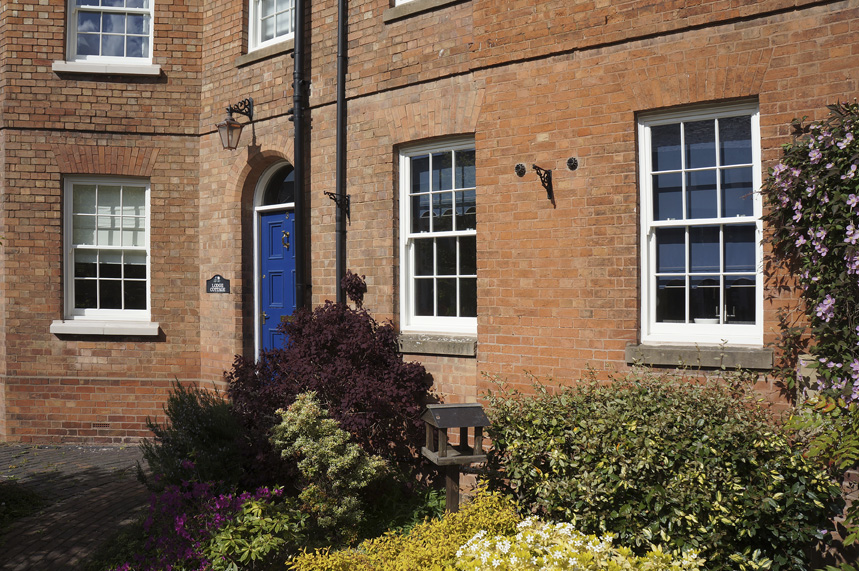 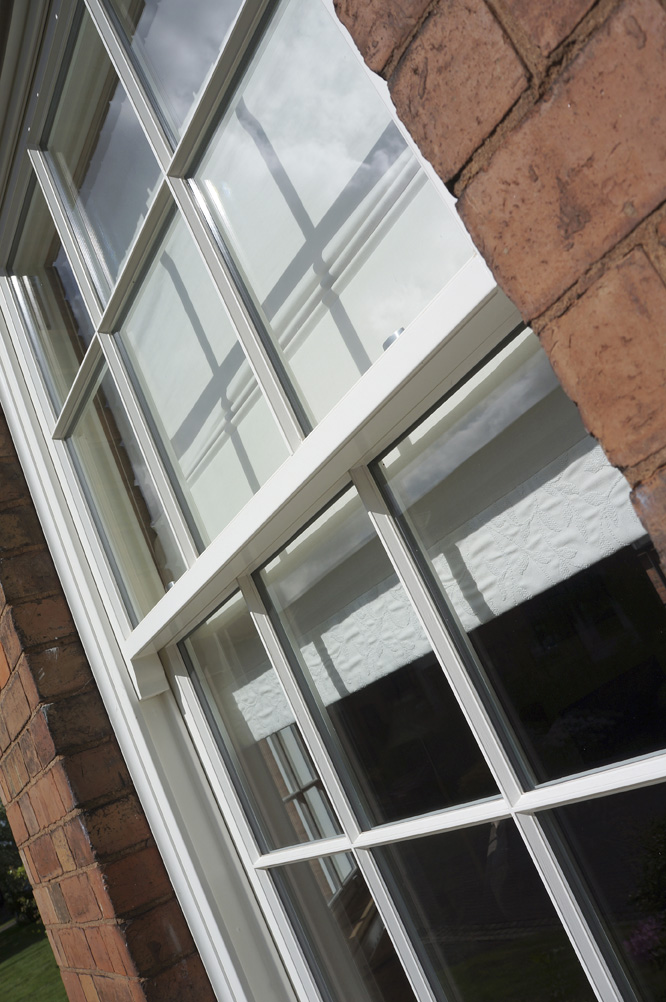 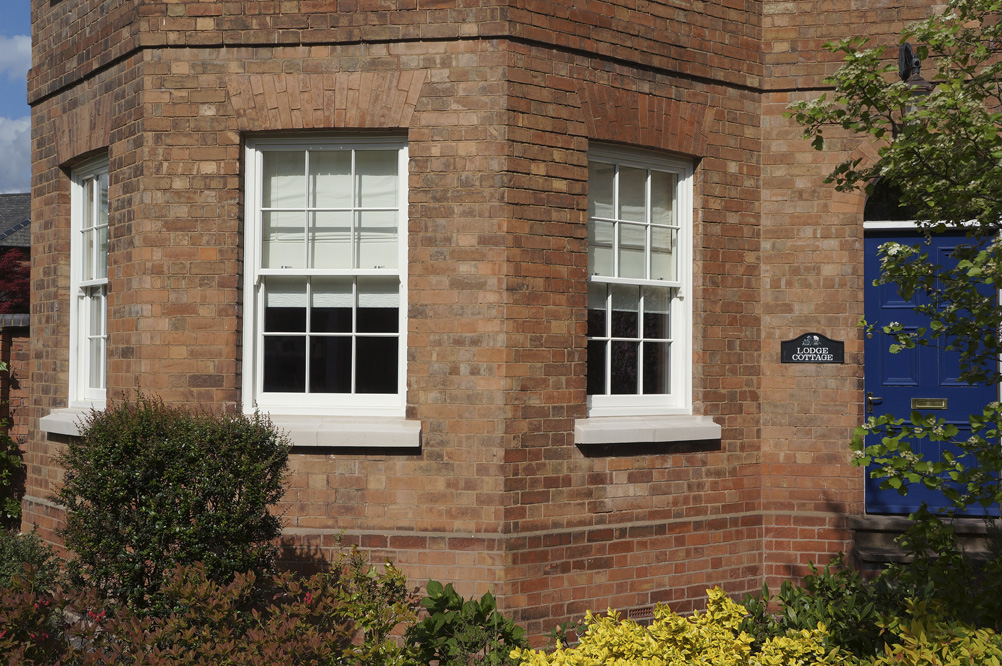 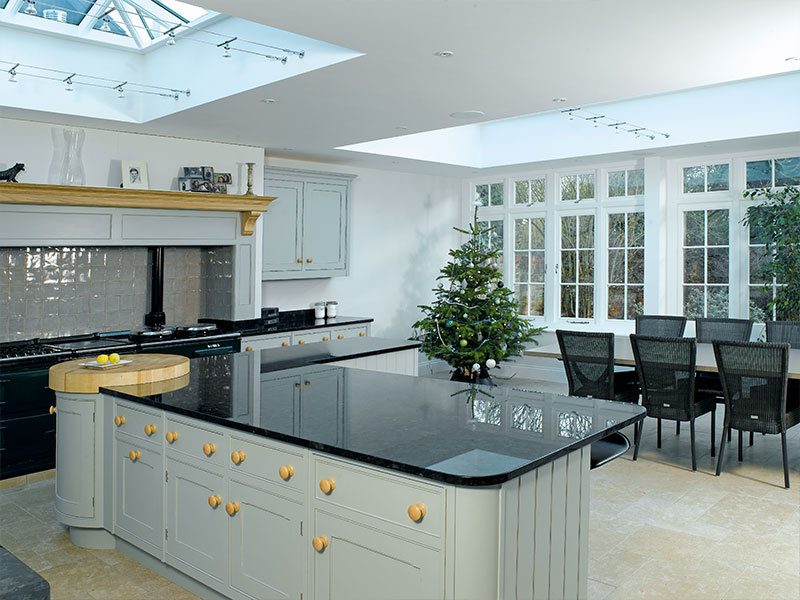 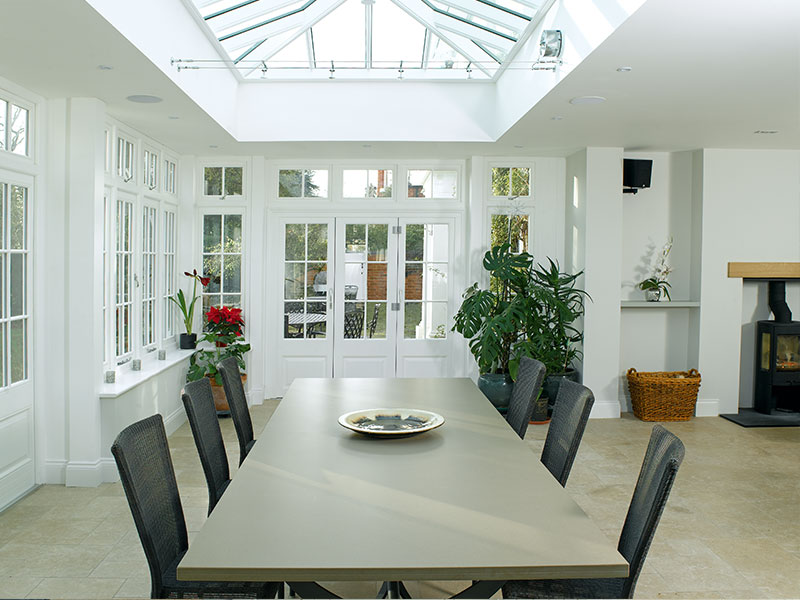 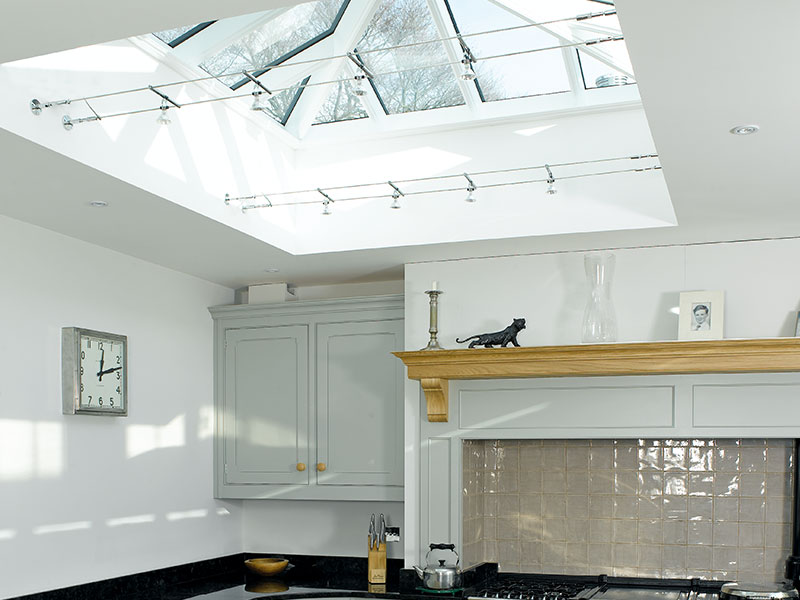 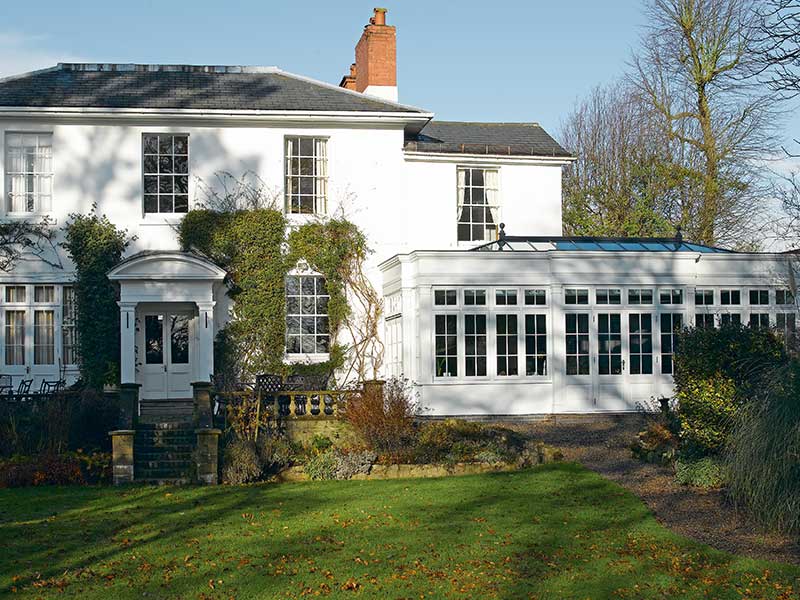 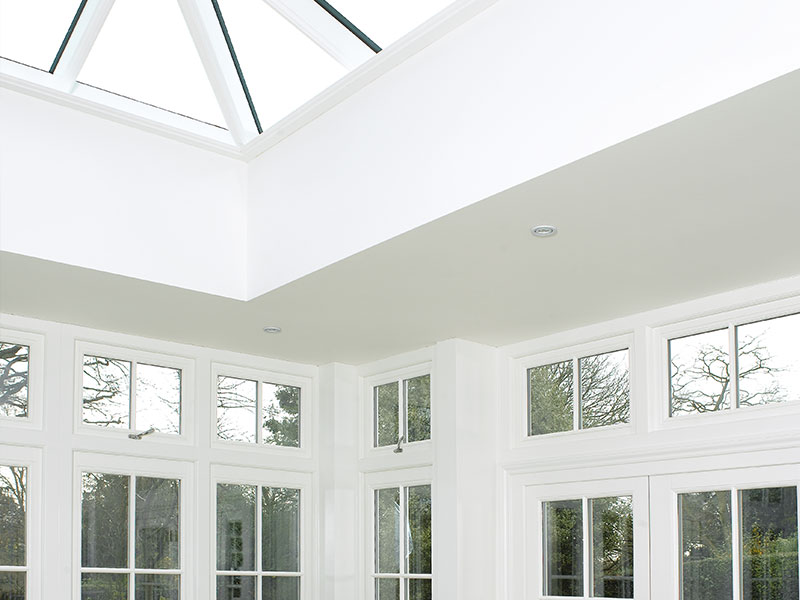 Mandy and John Gannon have transformed their Edgbaston home to include a stunning orangery kitchen with plenty of space for socialising and relaxing.

The house, which is Georgian with two Victorian wings, is stunning and the couple fell in love with it at first sight. The orangery and new kitchen are the first major project the Gannons have taken on with the house and they are thrilled with the results.

“The orangery was built a few months ago. We decided we wanted one as we had a very small kitchen and a large conservatory. They were separate rooms so you couldn’t see the garden from the kitchen.”

“We decided to have to have a brick-built orangery rather than a mainly glass conservatory because, as it is south facing, we didn’t want it to be too hot during the day.”

The whole effect is one of light, airiness and space. The muted colours – grey and white – and the natural materials of limestone, wood and granite work amazingly well against the backdrop of the garden. The kitchen is a dream workspace and the perfect place to spend time as a family.

“We chose a Smallbone kitchen because we loved the design and they came up with some really good ideas. We looked at three companies and took elements of the Mark Wilkinson design into the kitchen. The knobs, for example, are from the Mark Wilkinson Cook’s Kitchen”

The kitchen is painted in Fired Earth’s Granite and the walls are Bone White from the same range and also features a green 4-oven AGA.

The couple are obviously thrilled with the new space, which is both large and impressive. “We’re very pleased with it. It came out even better than we expected… the project came in on time and on budget.”

“Having the orangery has changed the way we spend time in the house. We practically live in here.”

This property was purchased by our clients in the early 2000s and previously to this was used as a farm residence.

The home is originally from the Georgian period but features a significant Victorian extension.

Previously the windows in the Denton household had been a mix of wooden sash and metal windows, some of the wooden windows were painted shut and many were in a state of disrepair due to their age. They wanted to restore the traditional appearance of the house whilst also introducing uniformity in the entire property. “Having the new windows is a double-edged sword really” the Denton’s say “they’re so well matched to the originals that they don’t look hugely different and you’d hardly know they’d been replaced, or not from a distance at least but this is a very good thing as we’ve also gained modern benefits.”

The products fitted in the property are a mixture of slim box sash windows, flush casements, french doors and stable doors. The Denton’s chose to have all of their products in a hardwood timber, the species that we use is Meranti and they chose to have them all painted in cream other than the stable doors which are dual colour, black on the outside and cream internally to match with decor.
The Denton’s have been very happy with the products they chose. “We’re very pleased indeed and delighted with the movement of the sash windows; opening and closing them is a simple pleasure but we do love to, just because we can now.

The stable doors are a fantastic addition too, aesthetically pleasing and giving much more light inside; they’re very practical with pets and children.”
“One elevation of the house overlooks a busy road, which is where our daughter’s bedroom is; she hardly hears any noise from the road now as a result of the new windows, so this is also very pleasing.” 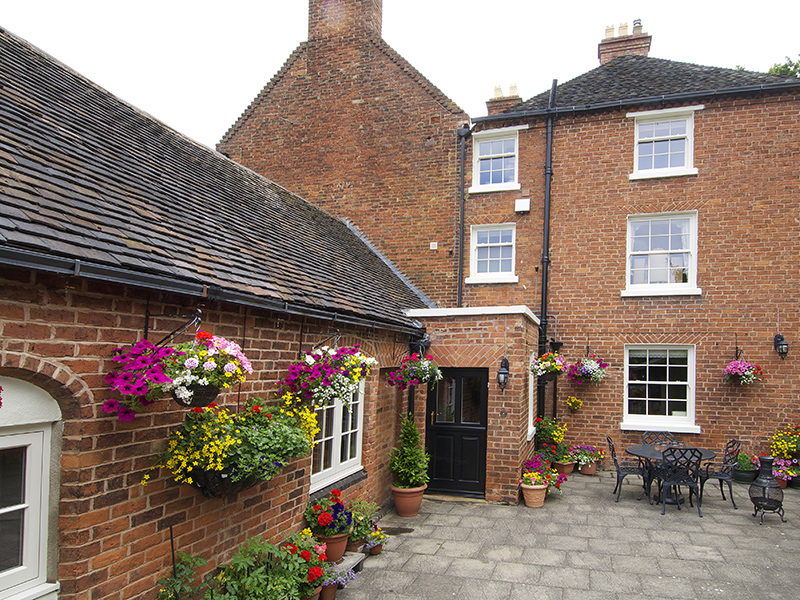 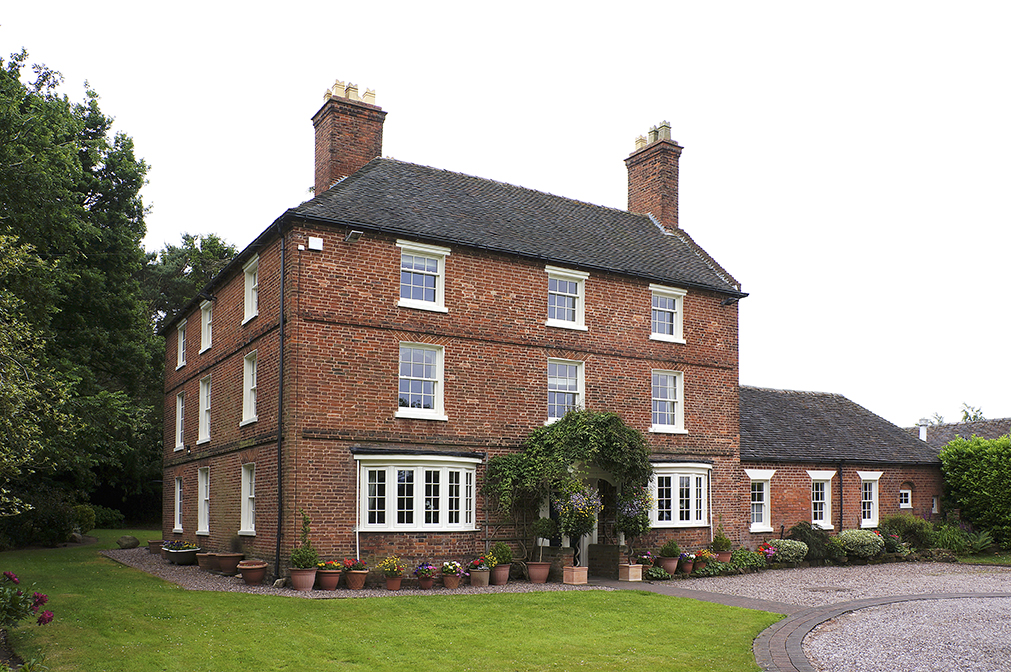 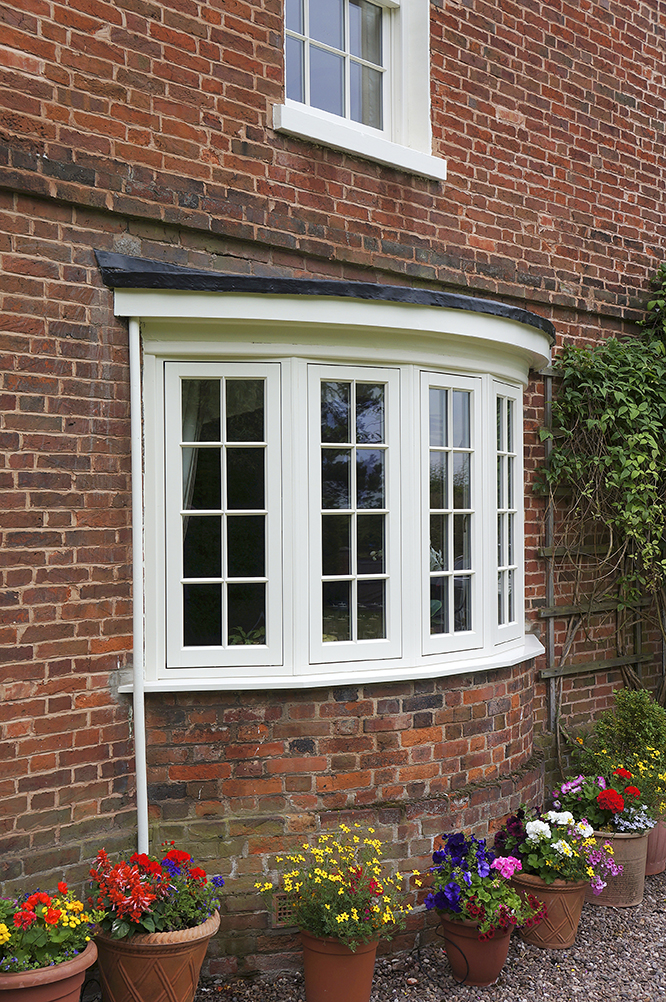 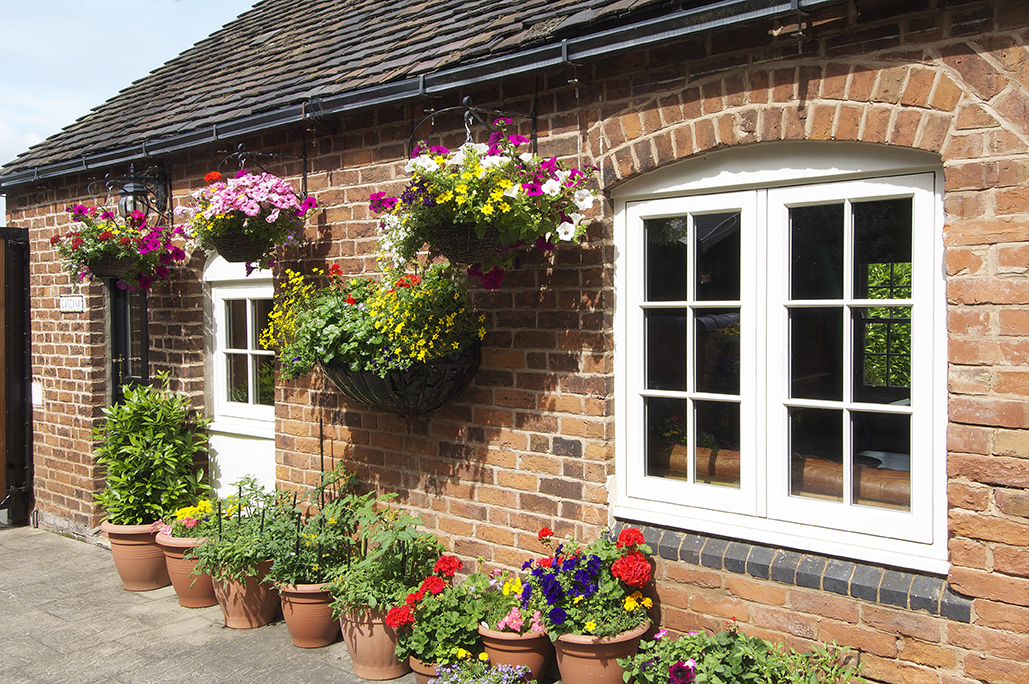 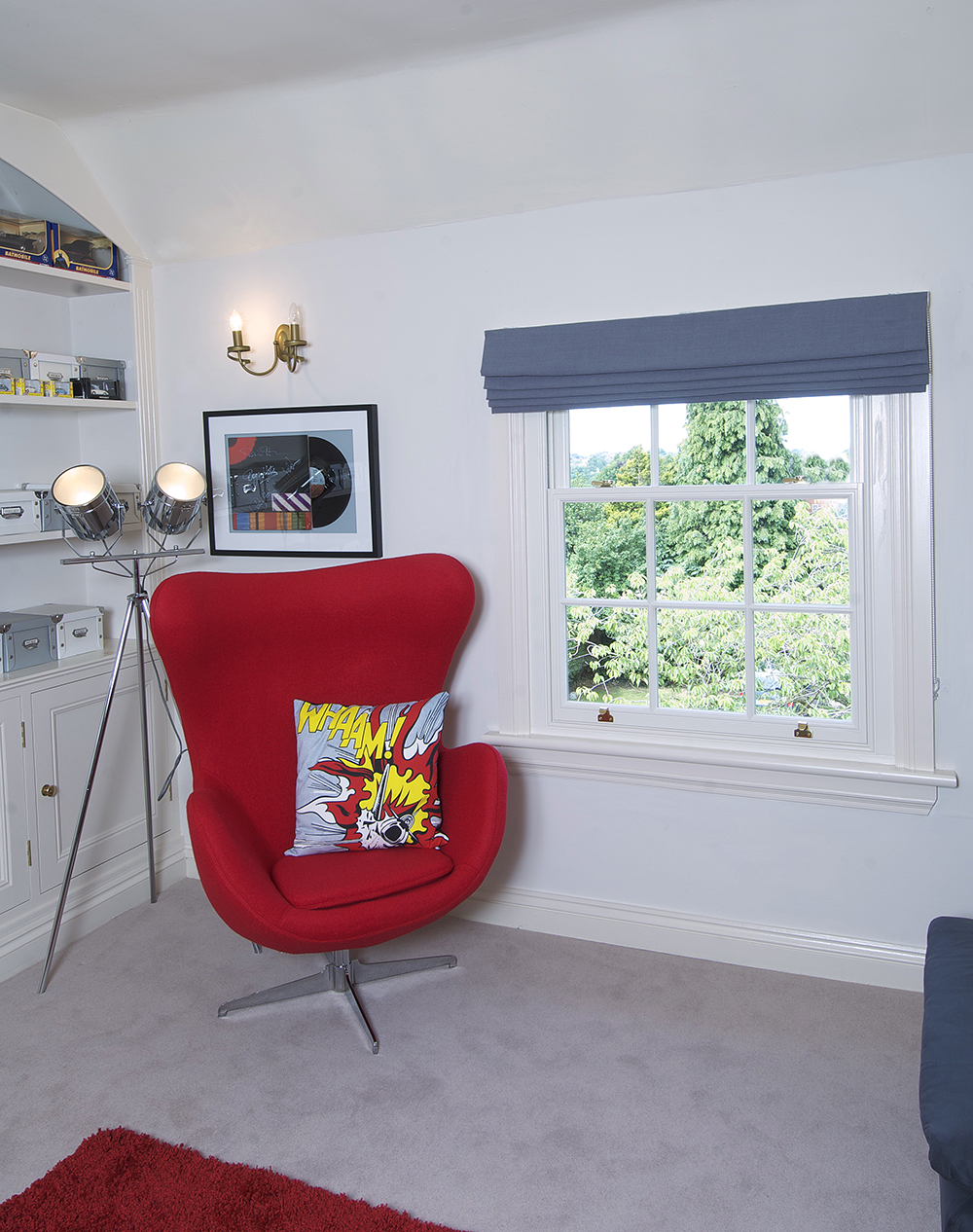 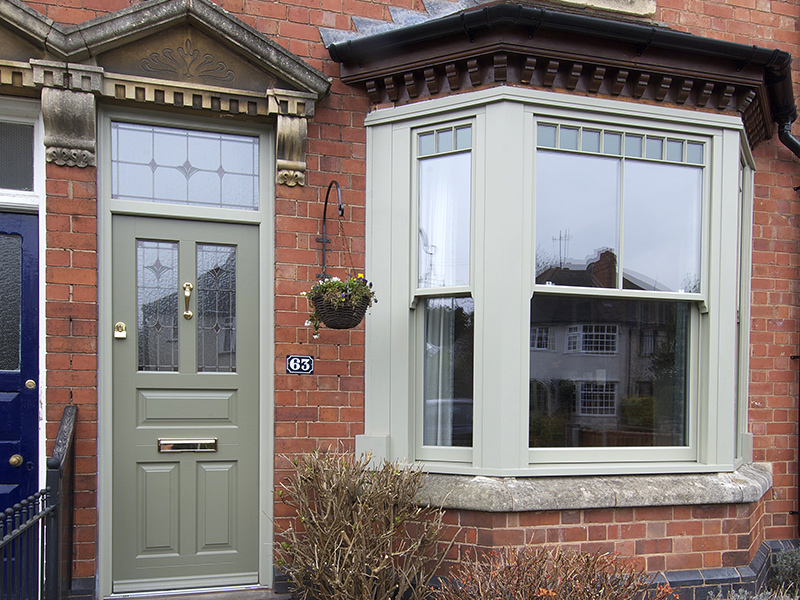 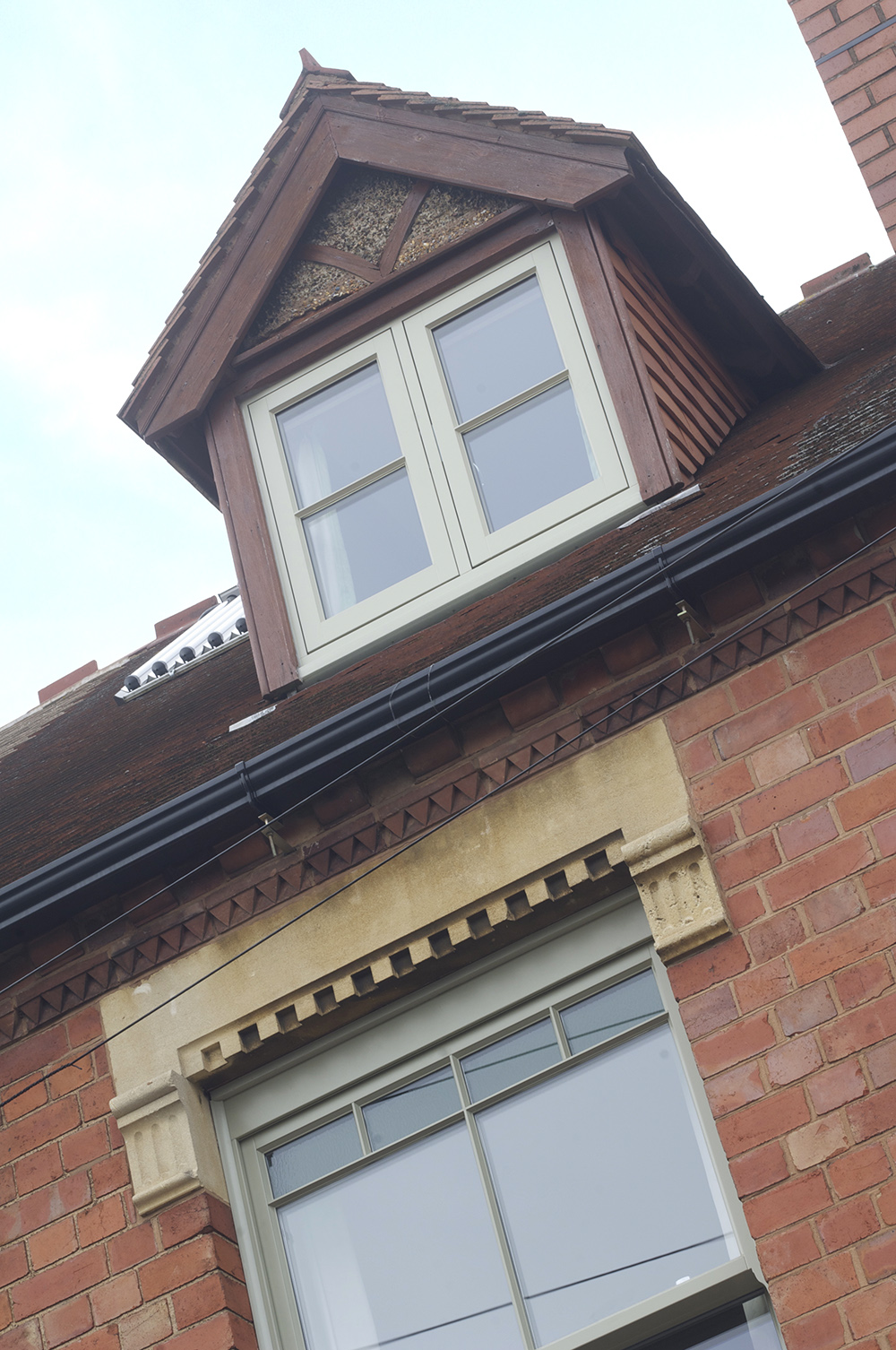 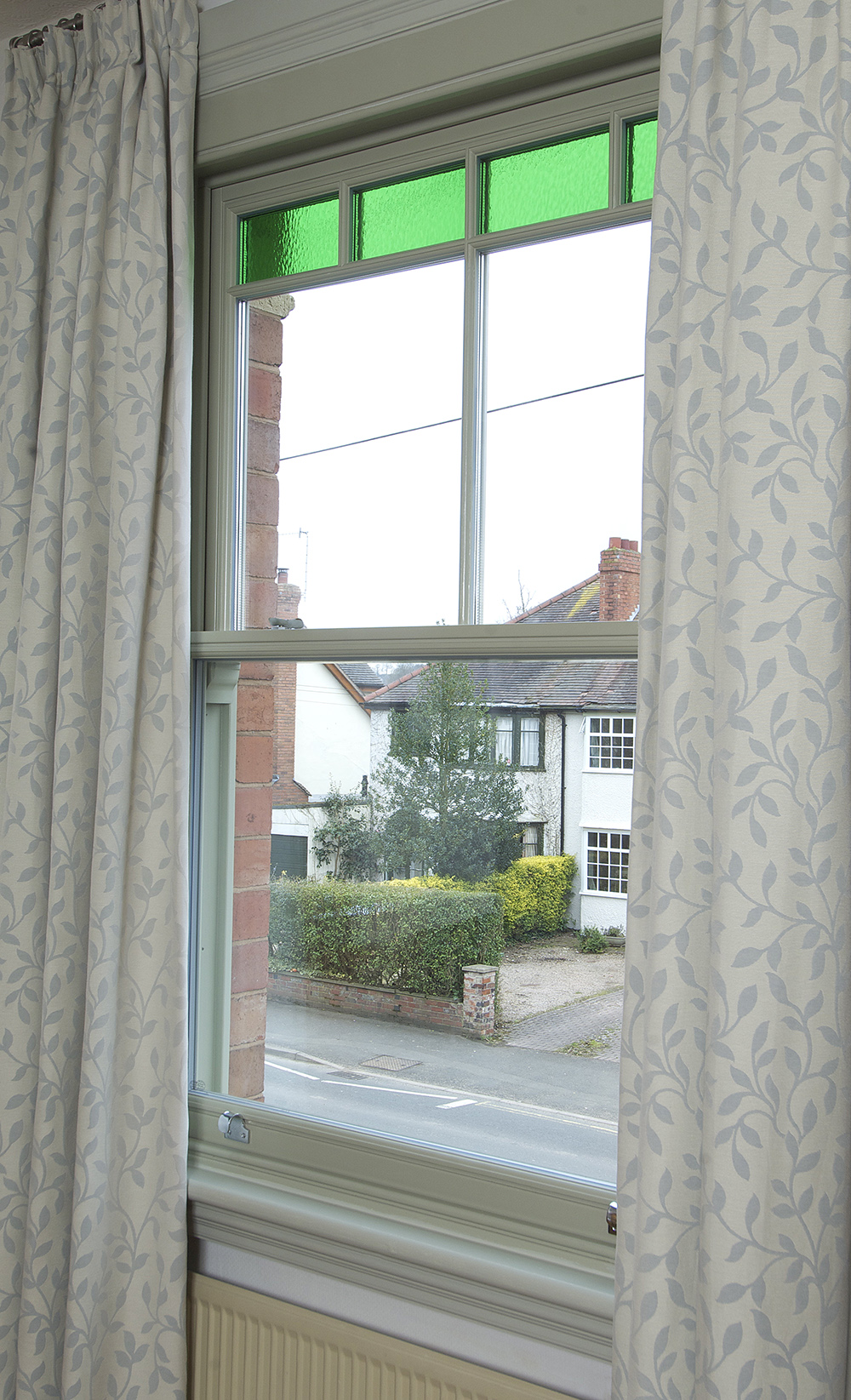 This three story property in Bewdley, Worcestershire employs both the modern and traditional in a window and door make over.

The earthy colour used is ‘French Grey’ and adds a natural contrast against the red brick property, coordinating the wooden “Kingston” door and sash windows. Using the same colour on door and windows adds a strong theme and really unites the individual components with simple style. French Grey is available as standard for Timber Windows products.

Sash windows replaced in this installation make the most of strengthened timber – engineered wood allows for slim glazing bars and sashes whilst supporting the double glazing. Slim bars are essential in accurately replicating period windows and also mean that natural light coming in to the property is retained – this Worcestershire home also benefits from the performance of modern glazing and strong security features.

The front door is the ‘Kingston’ door design by Timber Windows and was customised to match the doors of neighbouring properties -reducing the height of the glazed panels and adding a horizontal panel below them.

The small decorative panels in the tops of the sash windows were carefully matched to the originals and really ensures that the property looks every bit as good as it would have when it was first built, only much better in thermal efficiency and security.

Deco casement windows were designed for interwar properties, those built between the two great wars. Glazing bars are used to create the squares in the upper sashes, synonymous with the time period and add real character to the property.

Monochrome paint effects really enhance the window style, recessed sashes are created through clever design of the frames and the black paintwork continues the black brick and guttering detail on the Birmingham home.

The deep ‘Hamstead Red’ chosen for the Kingston front door equals the striking effect with an added warmth. This stunning home offers modern thermal properties to match the style – the timber windows and doors carry off original designs with slim glazing bars and frames, yet incorporate the very best in double glazing – low U-value keeps warmth in whilst natural light has minimal reduction. Security is very modern and gives valuable peace of mind.

If this style would suit your home give us a call to discuss the cost and options – for further inspiration, take a look through the rest of our case studies. We will be happy to assist you find the right new windows and doors for you. 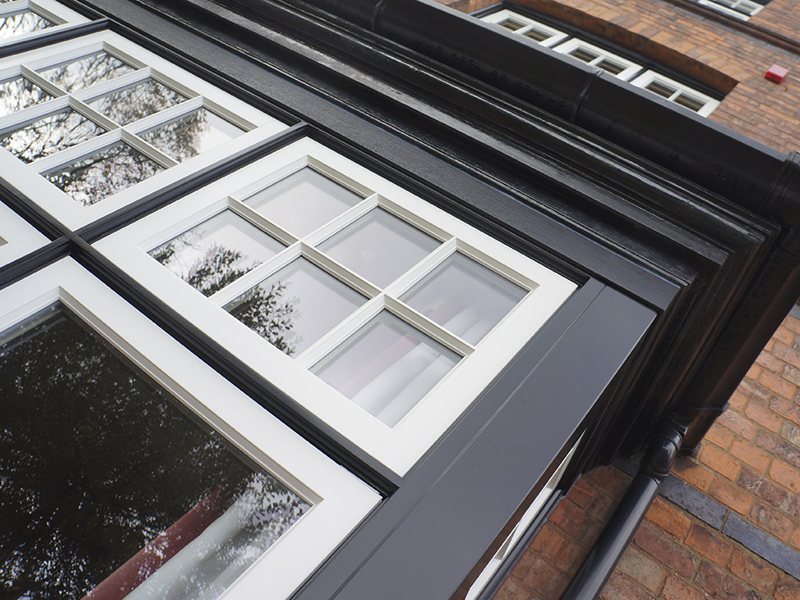 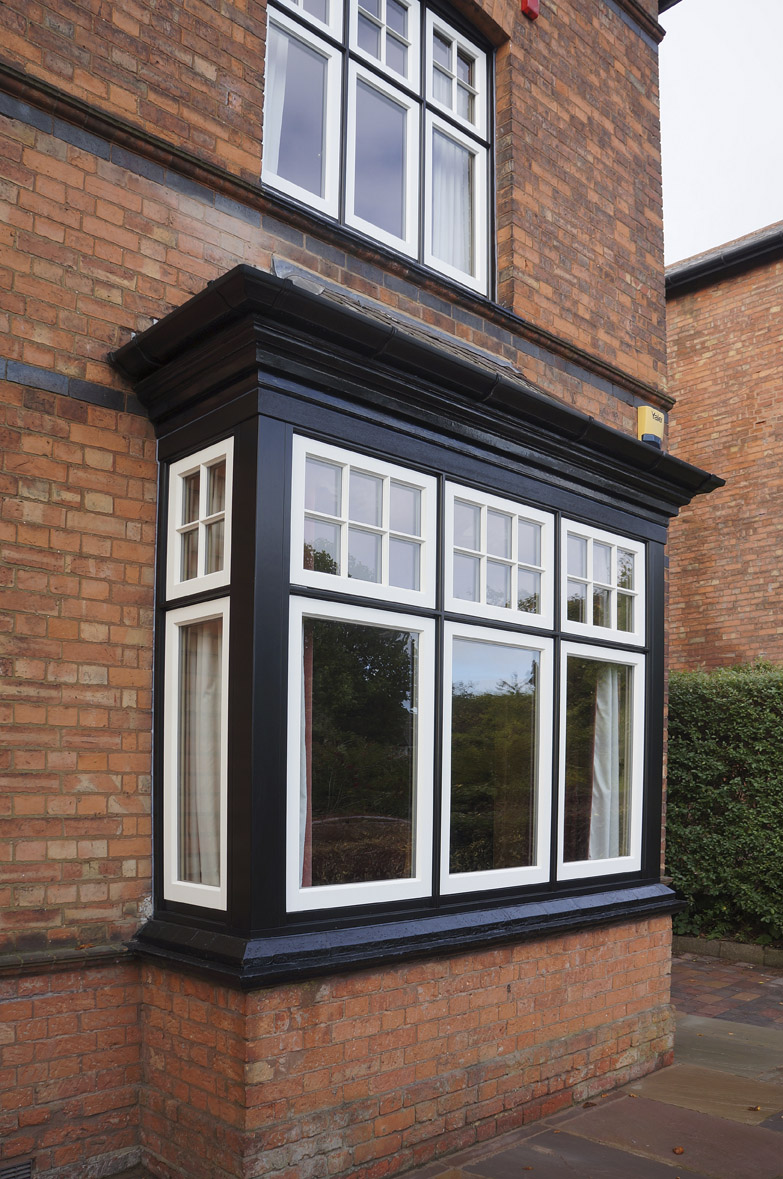 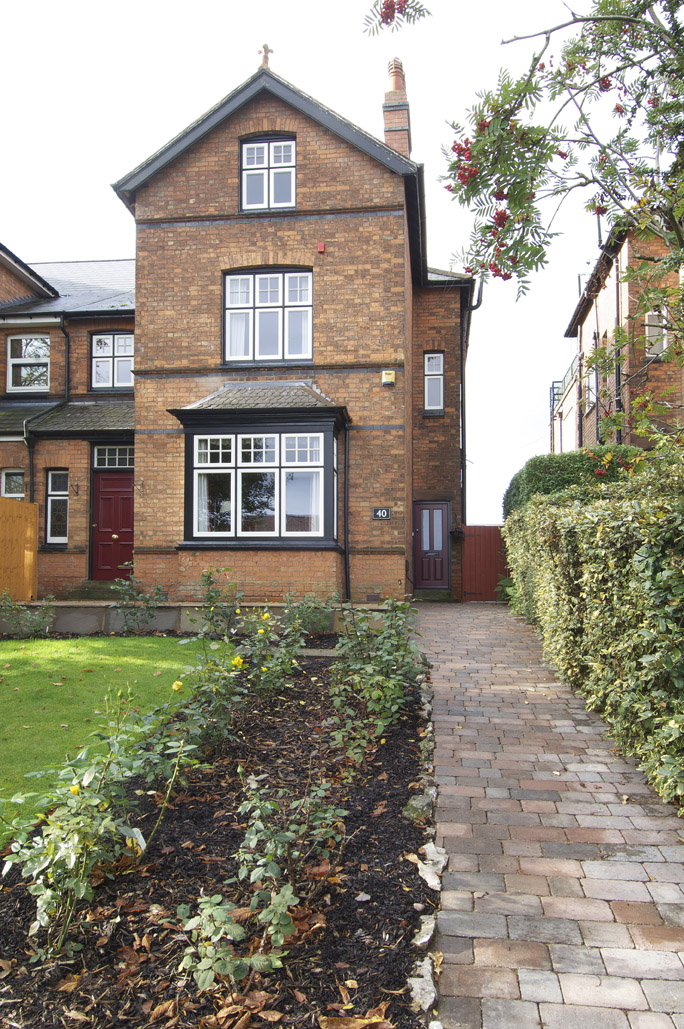 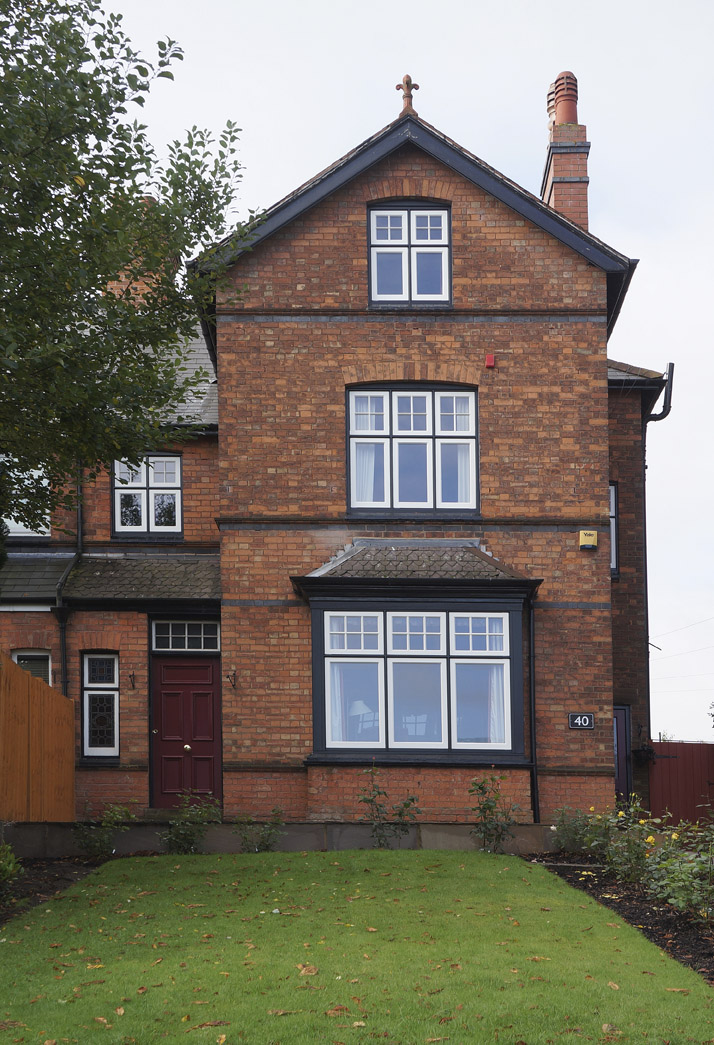 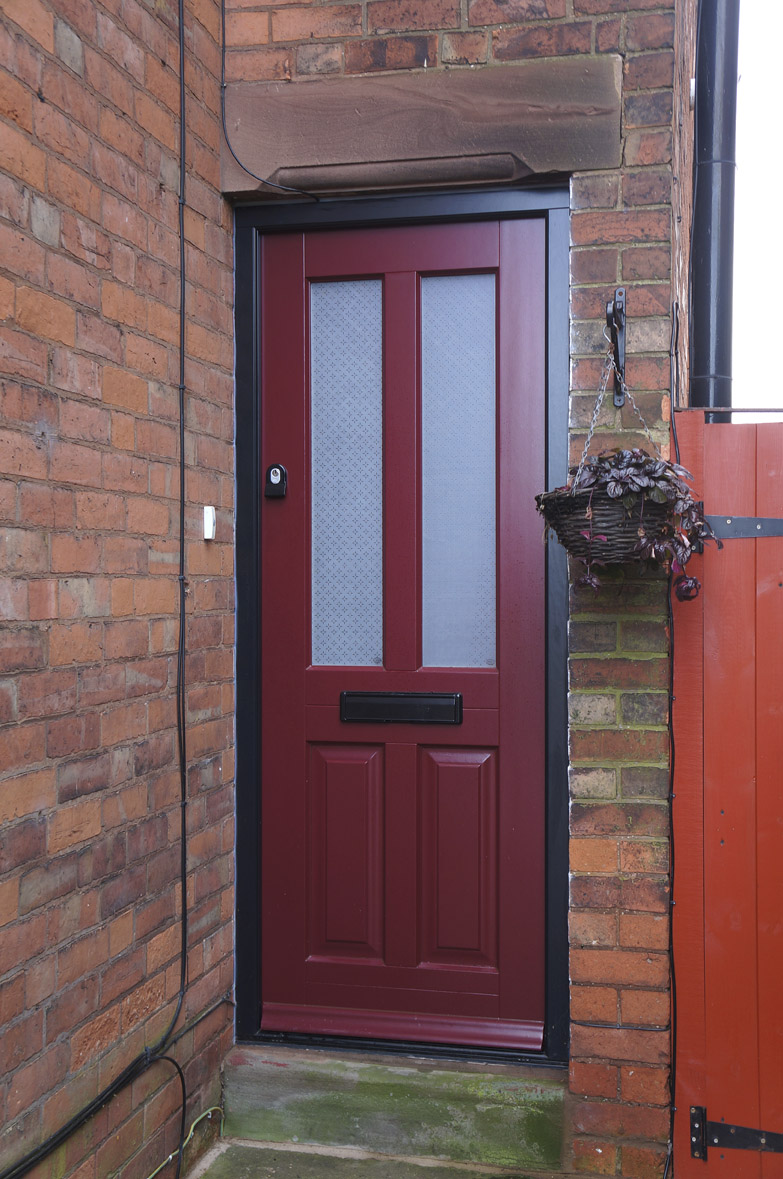 Arrange a visit to the showroom

We use only proven top quality materials and hardware.

To reduce heating costs and to improve comfort levels.

Our products feature the most advanced locking mechanisms.

Everything is designed to suit the type and style of a property.